Music Teacher Shortage! Time for Crisis or for Change?, Part I

The purpose of this report is to convey information that I presented at a panel session at the National Association of Schools of Music (NASM) annual meeting in Dallas in November 2001. The panel presentation, "Music Education and Performance Programs: Isolation or collaboration?," was organized by Karen Wolff, Dean of the School of Music at the University of Michigan. Panel members examined issues related to the current shortage of music teachers in public school music education.

Other members of this panel were Tom Lee, President of the American Federation of Musicians, and Carolyn Lindemann, Past President of MENC (the National Association for Music Education). Tom Lee offered statistical information on the job market among professional musicians. I will briefly discuss the presentations of these panel members and then share information that I gathered regarding music job vacancies in higher education.

It was no surprise to hear that of all jobs available for performing musicians, only a small percentage of these were full time. And there are many fewer jobs open every year than there are graduates looking for jobs. Lindemann shared that there is a great and growing shortage of music teachers in the public schools of the United States. Although there were roughly 7000 public school music teaching jobs open in June 2000, there were only approximately 3700 graduates with BM degrees in music education.

While there is a music teacher shortage in public schools, music education vacancies in higher education are growing as well. Based on data from the College Music Society music vacancy lists, music education positions have had the greatest growth compared to all other positions since 1980. The charts at the conclusion of this article highlight this growth. In these charts, comparisons of the percentages of job vacancies in the CMS vacancy list for the years 1980, 1990 and 2000 are made. Chart 1 shows percentages of job openings for all job listings in the CMS vacancy lists in 1980, 1990, and 2000. 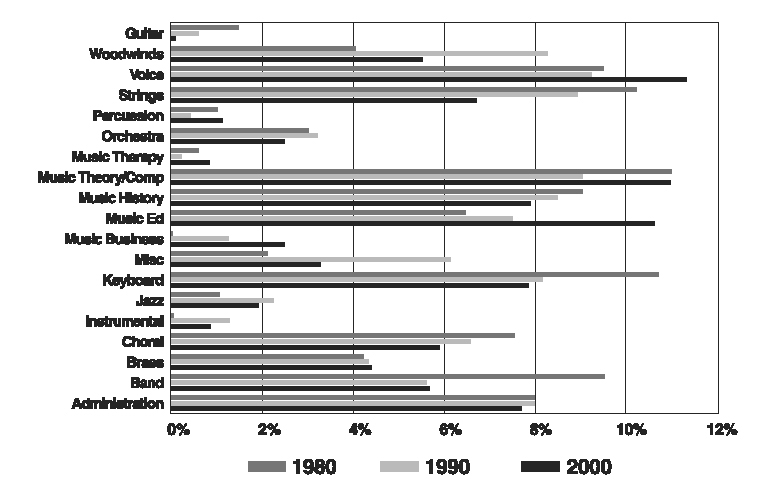 Charts 2, 3, and 4 isolate or combine data and compare growth of vacancies since 1980 in various positions. Chart 2 compares CMS vacancies in music education to those in music theory and composition, music history, and music administration. The rise in vacancies is the steadiest and most consistent in music education when compared to the others. 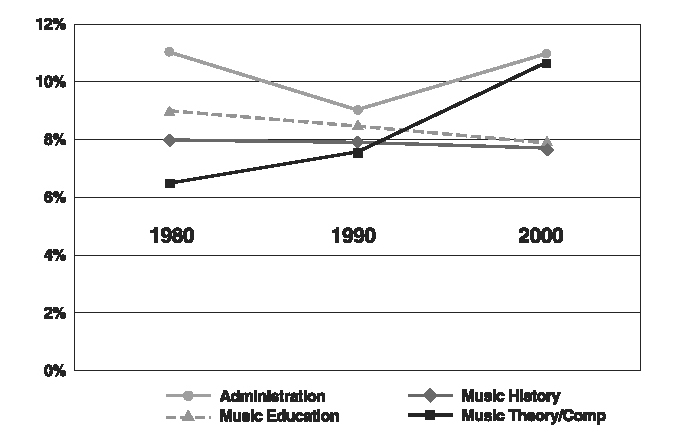 In chart 3, the vacancy openings in various ensemble teaching-conducting positions are compared to areas to music education in 1980, 1990, and 2000. Music education has a comparatively drastic increase over the 20-year period while the ensemble position vacancies have declined. 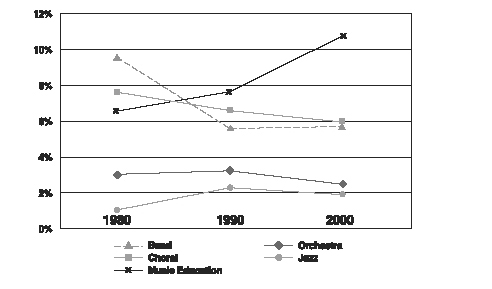 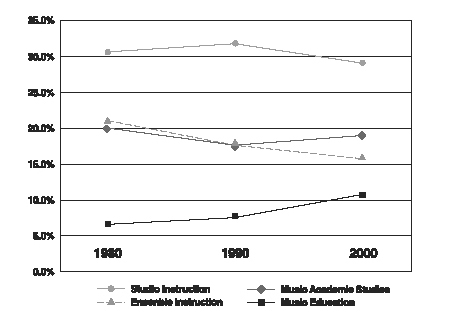 Maud Hickey is associate professor and coordinator of the music education program. Hickey’s research interest lies in the teaching of, as well as assessment of, musical creativity as manifest through improvisation and composition. She is a six-year recipient of a $50,000 grant from the Chicago Community Trust to work with juveniles in the Cook County Juvenile Detention Center on music composition projects. Her book Music Outside the Lines: Ideas for Composing Music in K-12 Classrooms was published by Oxford University Press (2012). She is the author of chapters in several books and articles in journals such as in Music Educators Journal, General Music Today, Journal of Research in Music Education, and Research Studies in Music Education. Hickey has been invited to present her work at several state, regional, national and international conferences. She currently serves as a member of the Society for Research in Music Education Executive Committee, and on the professional development committee of The College Music Society. In 2012, she was appointed a member of the inaugural cohort of Faculty Fellows for Northwestern’s Center for Civic Engagement and is a member of the Northwestern University 2015-16 Public Voices Fellowship program. Previous to work at the University level, Dr. Hickey was a public school band director.