Music Theory Through Musical Theatre: Putting It Together by John Franceschina 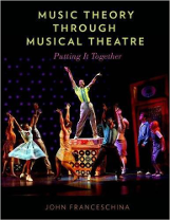 Music Theory Through Musical Theatre: Putting It Together  by John Franceschina

A tonal harmony textbook with a difference, this fast-paced offering is directed toward musical theater students and uses examples exclusively from the musical theater repertory. The book is informed by Franceschina’s long experience as a Broadway composer and musical director, and communicates the concerns of a professional who has worked with thousands of singing-actors trying to build careers for themselves in show business, an acutely competitive field of daring.

Its three parts are divided into fifteen chapters; these are intended to be spread over the course of a sequence of multiple semesters. Each chapter concludes with a series of exercises; the book has an accompanying website through which students can listen to examples from the text. The first part deals with rudiments. While much of this is standard fare, a number of pedagogical decisions merit attention. For instance, emphasis is given early on to the keyboard as a means of embodying music. While embodying music is, quite literally, what singers do already (not only with their voices, but with their every gesture), the externality of a keyboard makes notes, intervals, scales, and chords definite and more nearly objective. Included in the chapter devoted to rhythmic notation is the important observation of the occasional discrepancy between the way a rhythm is notated and the way it is to be performed, the most frequent example being the use of undifferentiated eighth notes that are meant to be swung. Examined, too, are the related matters of syncopation, missed beats, and back phrasing.

The material pertaining to scales and modes is particularly rich. In the introduction to the major scale, Franceschina cites a number of examples—eight from Richard Rodgers alone—in which that scale serves “as the basis of melodic interest” (39). In the introduction to the harmonic minor scale, mention is made of a song from The Pajama Game, “Hernando’s Hideaway,” which uses that scale as its pitch basis. What is its effect on the song? Franceschina’s answer:

The repeated half steps in the melody, the separation of the lyric by rests creating a kind of breathless staccato, and the exotic raised seventh instilled in the number a kind of enigmatic atmosphere that proved to be exceptionally dramatic and successful in performance (52).

Behind this observation lies an important implication: it is all too easy to forget the incalculable effect of the simplest, yet most profound, materials. And yet, it is precisely such effects that register so immediately with an audience and leave a lasting impression.

Modal mixture is first introduced as a feature of melody, not harmony, for the reason that a number of songs in the musical theater repertory use aspects of both the major and the minor forms of a single key. Franceschina is keenly interested in having young singers understand and appreciate why a single melody, while maintaining a steady tonic, might use both raised and lowered scale degrees 3, 6, or 7. When it comes to modes, he goes beyond grouping together those that resemble the major scale and those that resemble the minor; beyond this, he speaks of modal ethos, even citing the work of the fifteenth-century theorist Adam of Fulda! He does so not to draw attention to his learning, but to point to something very old, something that nevertheless retains the ring of truth to it: namely, that certain collections of whole steps and half steps are meant to suggest specific mental and physical states.

The treatment of intervals is similarly thorough and methodical. All perfect intervals are introduced first—along with a caveat about the dual nature of the perfect fourth. Both perfect and major intervals are presented by way of their position above the tonic note of the major scale. In the naming of intervals, mention is made of the use of both ordinal numbers and cardinal numbers; when to use the former or the latter is made abundantly clear. Next come minor, diminished, and augmented intervals; then a section devoted to the tritone; and last a section concerning interval inversion and compound intervals. Time and again, Franceschina dwells on the impact certain intervals make, as, for example, when he calls the minor third “somewhat darker” and “less resolved or final” than the major third, or when he points to the way an ascending minor seventh moves “forward toward an anticipated resolution, typically a half step lower.” He devotes nearly an entire page to the perfect unison, an interval too often neglected or played down in music theory classes, and the way it can sound “hypnotic” in one context, “comic” in another, and even “libidinous” in a third.

The second part of the book begins with a consideration of harmony; what is noteworthy is the path Franceschina takes to the topic. He begins by pointing to the many differences between a lead sheet and an arrangement; to differences in complexity and texture from one arrangement to another; and to differences in latitude given by composers to arrangers (in the event that the composer is not also the arranger). This last point he illustrates with an anecdote from his experience as an arranger for the Broadway stage; what it emphasizes is that, no matter the circumstances, the arranger must come through with a score that advances the plot and heightens the mood.

This might be a somewhat digressive path by which to approach harmony, but it leads to an essential point: “No matter how specific composers might be in their instructions, they always provide some kind of tonal or chordal basis for their melodies called harmony” (102). Harmony provides the building blocks of an arrangement. Harmony is the background with which and against which singers fit the lines of their melodies. Harmony is a main way music conveys the sensation of tension and release, yearning and fulfillment. These are reasons why musical theater students should understand something about this abstract yet magical topic.

Franceschina begins by dealing with triads and their inversions, seventh chords and their inversions, and the various kinds of embellishing tones. Immediately following the introduction of Roman numerals and a discussion of accompaniment patterns and conventions, he takes up the matter of harmonic function, observing that slightly more complex or unusual chords can often represent or stand in for chords that are simpler and more basic. Mention is also made of major and minor sixth chords (sometimes called “added-note chords”; respectively, a major triad with a major sixth above the root and a minor triad with a major sixth above the root). Maintaining that these are not to be confused with inverted seventh chords, Franceschina urges that they be interpreted contextually, namely by taking into account the bass and looking to see if the nominal seventh in fact resolves.

The next topic examined within the larger part on harmony is counterpoint. Again the topic is approached indirectly, this time with Franceschina emphasizing the versatility necessary for a successful career in today’s musical theater. “Nowadays,” he writes, “it is not enough to be qualified in only one area of expertise.” On the contrary:

Choreographers expect the chorus to be dancers capable of interpreting dance steps quickly; stage directors expect chorus members to be actors able to perform dialogue convincingly; and musical directors expect to be conducting singers trained in the art of part-singing (165).

Rehearsal time is expensive and limited; performers must be able to learn quickly and execute dependably; execution, in the realm of music, entails performing one’s part convincingly regardless of what else is taking place at the same time. Understanding counterpoint—the ways in which one line of music is combined with one or more other lines of music—is thus imperative to the aspiring performer.

Two chapters are devoted to counterpoint. In the first, Franceschina borrows from the Gradus ad Parnassum of Fux to demonstrate how first- and second-species exercises are constructed; then, to show the dramatic possibilities inherent in these species, he gives examples from works by Frank Loesser, Irving Berlin, the Gershwins, and others. The second counterpoint chapter includes more illustrations from Fux; examples from the musical theater repertory of third, fourth, and fifth species counterpoint; and a too-brief discussion of the use of fugue. Always and appropriately, attention is paid to the emotional impact of the device under consideration.

Somewhat unusually, common-tone and passing diminished seventh chords are introduced before the Neapolitan sixth and augmented sixth chords. The treatment of the German augmented sixth chord is commendable because Franceschina notes that it is often spelled enharmonically as a major-minor seventh chord rooted on the lowered sixth scale degree. Here, then, is an explanation of the apparent discrepancy between the way something is written and the way it sounds or functions. Enharmonic notation simply makes the music easier to read.

Following the section on augmented sixth chords comes an introduction to harmonic modal mixture, which in turn leads to one of the most thought-provoking discussions in the entire book. It centers on the relation between the analysis and perception of music, the way tastes change as one generation gives way to the next, and the accommodations musical theater composers have made to insure that their work remains understandable while keeping pace with shifting tastes. Among the points considered here are the free resolution of chromatically-altered chords and the influence of contemporary popular music.

In connection with the various song forms, Franceschina discusses phrase and period structure. Cadences, too, are treated, along with their expressive potentialities. The second unit concludes with a discussion of modulation, extended tertian chords (ninths, elevenths, and thirteenths), and the use of suspended chords and added-tone chords. As the end of the unit approaches, the analytical commentary becomes richer and more extensive. And this provides a smooth transition to the third, and last, unit of the book.

This last unit offers students a chance, to adapt the subtitle of the book, “to put it all together,” the “it” being what they have learned about tonal theory and analysis. The three chapters of this unit are devoted to the analysis of partial (and sometimes complete) numbers from the musical theater repertory, including the works of composers such as George Gershwin, Stephen Sondheim, and Jason Robert Brown. Franceschina’s analytical observations are driven by his concern for the way music establishes mood and portrays character, how it hints at subtext and conveys a sense of place, and how it lends emphasis to crucial events within a show. These observations are intended to serve as a model for students as they speculate about the effect of the pieces Franceschina puts forward for analysis.

Music Theory Through Musical Theatre serves admirably well as a textbook geared toward its intended audience. That said, it would also work well for a theory teacher who wishes to move away from the analysis of the canonical works of Western tonal art music. True, a teacher of a more traditional theory class might quibble with the placement of certain topics—for instance, the discussion of cadences could be placed earlier in the book—or with the explanation of a term—the discussion of chord position could be plainer. All the same, such a teacher would find—indeed, any teacher will find—much in the book of admirable depth and sober good sense.

John Check is an associate professor of music theory at the University of Central Missouri.