Eduard Hanslick’s On the Musically Beautiful: A New Translation, by Eduard Hanslick, translated by Lee Rothfarb and Christoph Landerer 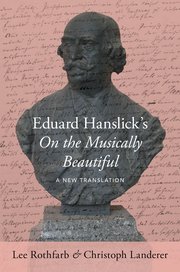 Translations are essential tools for the study of music. They offer students ready exposure to foreign-language materials, and they serve as efficient inroads to important works for more seasoned or even specialized scholars, who ideally revisit passages of interest more carefully in the original language. Eduard Hanslick’s treatise on musical aesthetics, Vom Musikalisch-Schönen, certainly holds a place among works deserving of a reliably accurate and readable English edition. With their new translation of On the Musically Beautiful, Lee Rothfarb and Christoph Landerer have given us just such a document.

First published in 1854, Hanslick’s monograph has been presented in two previous English translations. The first of these, The Beautiful in Music, was completed in 1891 by Gustav Cohen. At that time, Hanslick was still making occasional, minor revisions to the text, and Cohen relied upon the then-current seventh edition. Prepared by Geoffrey Payzant, the second English translation, On the Musically Beautiful, appeared just under a century later, in 1986. For unknown reasons, he worked from the eighth German edition.

The present translation proceeds from the tenth edition, the last to be published under Hanslick’s supervision. Representing the combined talents and experiences of one native German speaker (Landerer) and one native English speaker (Rothfarb), it is carefully thought out and well-executed. While the language remains difficult at times, it is generally easier to read than Hanslick’s original and is far more approachable than the Payzant translation. At the same time, one feels that Rothfarb and Landerer have achieved their goal of producing a translation that better expresses Hanslick’s intended meaning.

Take the following sentence from the central third chapter of Hanslick’s treatise as one typical example of the differences between the three translations: “Ist [eine bestimmte Melodie] einmal in die Phantasie des Künstlers gefallen, so beginnt sein Schaffen, welches, von diesem Hauptthema ausgehend und sich stets darauf beziehend, das Ziel verfolgt, es in allen seinen Beziehungen darzustellen” (Hanslick 1885, 74). This sentence, taken from the seventh edition, remained unchanged to the last. In Payzant’s translation, it appears as, “Once [a particular melody] has occurred in the composer’s imagination, his activity begins, which, starting from this principal theme or motif and always in relation to it, pursues the goal of presenting it in all of its relationships” (Hanslick 1986, 32). Compare this with the clearer and more faithful treatment of Rothfarb and Landerer: “Once [a particular melody] has entered into the artist’s imagination, his creative activity begins that, starting from that main theme and continually referring to it, pursues the goal of presenting it in all of its relationships” (46). Of course, both are a far cry from Cohen’s more liberal, almost poetic translation: “When once [some definite theme] has taken root in the composer’s imagination, it forthwith begins to grow and develop, the principal theme being the center round which the branches group themselves in all conceivable ways, though always unmistakably related to it” (Hanslick 1957, 52).

Among the several systematic improvements made by Rothfarb and Landerer, perhaps the most effective is their use of limited English equivalents for German terms central to Hanslick’s prose. As Rothfarb and Landerer point out, where in one paragraph Payzant used “a mental source of animation,” “ideality,” “ideal content,” and “mind” for the word “Geist,” they almost invariably—and certainly correctly—render “Geist” through some use of “intellect” (xliv). Also significant is their self-proclaimed adherence to “German patterns of expression” in working with idioms and complex sentence structures (ix–x).

However, the current volume contains much more than Rothfarb and Landerer’s translation of On the Musically Beautiful. In addition to the usual translators’ preface, the book includes three introductory essays by Landerer, Rothfarb, and Alexander Wilfing, as well as a readers’ guide, in which the translators suggest four paths through the book, from a one-chapter perusal to a full but reordered reading of the entire treatise; an appendix offering a translation of the opening paragraphs from the first edition with additional commentary; a glossary of English terms; a selected bibliography for further research; and a handy index. The readers’ guide is a valuable aid for professors seeking to tailor their use of Hanslick’s treatise to a variety of course objectives. Chief among this help, the translators include specific learning opportunities in their explanations for each of the increasingly complete readings. The appendix is also a welcome inclusion, as Hanslick significantly altered the opening paragraphs of the first chapter for the second edition. And the three introductory essays condense a good amount of previous scholarship into neat packages on the history of the treatise and its translations, Hanslick’s central concepts, and the philosophical background of On the Musically Beautiful. Of these, the last is particularly good at fulfilling its introductory purpose.

The translators devote much of their preface to discussing the difficulties of Hanslick’s mode of presentation, and it is specifically in these areas that the present volume might be found lacking. With the three introductory essays placed just after the translators’ preface, one does not begin reading Hanslick until nearly halfway through the book’s 224 pages. This might be less noticeable if the preface and the three essays were better self-contained. Instead, the essays tend to revert to arguments for the finer points of the translation. Perhaps because the deficiencies of Payzant’s translation are not fully addressed in the preface, that translation takes on almost equal status with the ostensible subjects of the introductory essays. The translators thereby introduce considerable redundancy into the text, sometimes even duplicating material from the preface, verbatim, in the essays. There is also some confusion in these recurring discussions as to which translation the authors are providing as they move between Payzant’s and their own.

These issues are insignificant, however, when one takes into account the value of the translation itself. In addition to fulfilling the need for a reliable English edition of this pivotal treatise on musical aesthetics, this volume lays a strong foundation for the continued exploration of Hanslick’s place within the history of philosophical and musical endeavors.

Hanslick, Eduard. 1957. The Beautiful in Music. Translated by Gustav Cohen.Indianapolis: Bobbs-Merrill. First published in 1891 in London by Novello.

Eric Elder is a Candidate for the PhD in Musicology at Brandeis University. Focusing on theory and the history of theory, Eric’s historical research engages with musical thought in fin-de-siècle Vienna and with the musical influence of that milieu in mid-twentieth-century America. His in-progress dissertation examines Rudolph Reti’s thematic process.