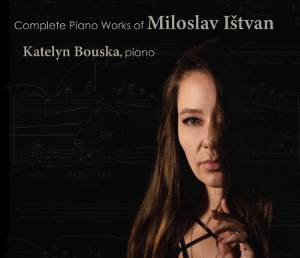 This new release of Miloslav Ištvan’s (1928-1990) complete piano solo works from the Philadelphia-based pianist Katelyn Bouska is an excellent introduction to the Czech composer’s music. Ms. Bouska plays with conviction, immediacy, and a lucid understanding of Ištvan’s musical language.

The first sonata (1954) opens with a warmth and optimism that closely echoes the beginning of Paul Hindemith’s third piano sonata. Ištvan’s compositional technique is more spontaneous than that of his German contemporary, however, being less closely worked-out. The nocturnal second movement is jazz-tinged, with a chromatic and melancholy figure that is reminiscent of Prokofiev. The opening of the finale hints at an homage to the beginning of the third movement of Ravel’s Sonatine, but quickly broadens into an ebullient theme composed of fast octaves that recapture the bright sonority of the first movement. Bouska’s playing brings out the lyricism and rhythmic vitality of the piece to great effect.

The five impromptus (1956) offer an interesting amalgam of styles. The first impromptu (marked con calore) successfully fuses Chinese-influenced figurations with bluesy harmonies, while the fourth (con fuoco) utilizes syncopation that evokes an American barn dance after opening with an East-meets-West flourish. The second impromptu is a charming neo-classical etude that perhaps would benefit from a lighter touch from Ms. Bouska. The remaining two impromptus point to Ištvan’s later development and are more introverted in character. The five impromptus are the most musically and technically accessible of the pieces on the disc, and would be a strong addition to any pianist’s concert repertoire.

The vigorous second sonata (1959) helps to clarify Ištvan’s priorities as a composer. Strongly sculpted thematic ideas—Ištvan has no shortage of them—are treated to thorough development. Ištvan occasionally overworks the material, toying with themes that are not distinctive enough to withstand that amount of intense musical scrutiny. The sonata culminates in a fugal finale in the third movement that is both audacious and playful.

Odyssey of a Child from Lidice (1963) is a musical rumination on the tragedy of Lidice, the Czechoslovakian town destroyed by the Nazis in retribution for the assassination of Reinhard Heydrich, a top-level Nazi functionary. The piece is abstract and enigmatic, featuring a significant amount of dissonance and a lack of clearly-delineated narrative. The ambiguity persists after multiple hearings, yet the work holds a hypnotic power.

The final piece is a revelation: the single-movement Third Sonata (1978) is mesmerizing and rivals the best of Alexander Scriabin’s mature works. The most distinct feature is a rollicking bass ostinato that appears out of nowhere, yet miraculously becomes the unifying force for the entire piece. Dissimilar elements such as an insistent polytonal chord that rings throughout much of the piece and a highly disjunct melodic motif are all part of the complex musical tapestry of this at times ecstatic work that caps Ištvan’s contribution to the genre on a high note.

Hsiang Tu received his D.M.A. in Piano Performance from the Juilliard School and is currently an Assistant Professor of Piano at Virginia Tech. His recent research and performances have been focused on animal-themed piano music and the complete piano-solo works of Debussy.