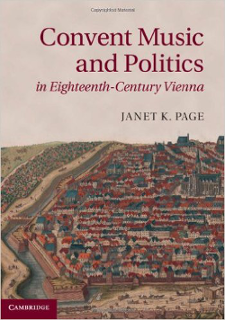 In Table 1 of her introduction (pp. 6-8), Janet K. Page inventories the number of visits the Habsburg family made to convents in and around Vienna in the year 1715. Averaging between four and five visits per month, the table clearly illustrates just how connected the imperial rulers were with their city’s religious life in the early eighteenth century. As Page carefully argues throughout the book, the Habsburg interest in convent ceremonies ebbed and flowed during the 1700s. Yet across the century, the royal family often used sacred institutions such as convents as spaces in which they could tailor their image as a politically powerful dynasty. In turn, Viennese convents cultivated sacred music for imperial, as well as religious, devotion, “recognizing and consolidating the noble family’s status and drawing the convents into the circle of ritual supporting Habsburg rule” (p. 15). Using various convents as case studies, Page clearly and convincingly makes a case for the interconnectedness between “music and piety, court and church” (p. 15) as the political priorities of the imperial family shifted during the eighteenth century.

Page’s meticulously researched book clarifies and deepens the understanding of how sacred music functioned within the life of the convents, and, more broadly, within the life of the imperial city of Vienna. Although a musicological study, Page offers much more than a simple discussion of the music at these institutions. Her book delves into the history of each of the nine convents founded in Vienna between the sixteenth and eighteenth centuries, and examines their individual structures and sacred rituals alongside their musical traditions. For example, Chapter 3 discusses how musical education complemented St. Ursula’s dedication to religious education. The nuns at this church were thoroughly trained in music, and used their musical talents in the convent school. Both the blend of historical detail and considerations of the social uses of music provide an holistic understanding of how Viennese convents became an essential part of the social fabric of the imperial city.

The musical analyses and historical revelations in this book provides a much-needed counterpoint to other studies of convent life before 1800, such as those by Craig Monson, Robert Kendrick, and Colleen Reardon. As Page suggests throughout, Viennese convents developed their own musical identities apart from their Italian counterparts. Italian convents largely disapproved of—and in certain cases, prohibited—nuns from making music after the Council of Trent. In Vienna, however, the imperial court expected and supported convent music, especially when it upheld the political image of the reigning emperor. Page argues this first in Chapter 1, as she sheds light on Viennese convent entrance ceremonies of young noblewomen connected to the court, revealing the elaborateness of the ceremonies in contrast to the more reserved Italian ceremonies. Italian comparisons also arise when Page considers the musical talents of the nuns themselves. In Italy, nuns had limited access to instruments and musical training after clausura, but in Vienna, convents such as St. Ursula were routinely granted exceptions if the music required resources not already possessed by the convent (pp. 78-80). Page also ascribes these allowances to the propagandistic use of sacred music during the late seventeenth and early eighteenth centuries. Despite different practices during the long eighteenth century, it is clear that Italian music—representing the “modern” style—grew increasingly popular, due especially to growing numbers of Italian musicians settling in Vienna.

Page threads politics throughout the book in order to show how the Habsburgs cultivated convent life and in turn, how convents responded to contemporary politics through music. Chapter 4, “‘A virtual picture of Arcadia’: Musical entertainments for Leopold I and Joseph I,” offers one of the more interesting case studies concerning the political uses of celebratory music in Vienna’s three Augustinian convents. First, Page uses the musical festivities given at St. Laurenz, which performed musical morality dramas in both German and Italian, in order to emphasize allegorical themes that would have resonated politically with the reigning emperors. Her examination of Beglückte Verbundtnüß (The Happy Union) (1688), an allegorical pastoral that involved a mixture of song, declaimed text, and instrumental music, shows how sacred worship could be refashioned into something more than entertainment. This production (discussed between pp. 114-129) was meant to feature the noble Hofdamen and Kostfräulein being educated at St. Laurenz, and as Page argues, the classical allegory emphasized “the union of nobility and virtue” as a tribute to the imperial family, who attended the performance. The second and third parts of the chapter discuss how the convents of St. Jakob auf der Hülben and St. Agnes zur Himmelpforte offered musical entertainments supporting the Habsburg’s role in the War of the Spanish Succession, fought during the first two decades of the eighteenth century. Page’s interpretation of Trattenimento Estivo (anonymous, around 1707 or 1708), an Italian musical drama performed at St. Jakob, involves an argument between the virtues, which is reconciled at the end in deference to the emperor. Page analyzes both music and text as an allegory for either political events or a dynastic marriage (see pp. 131-141). Her analysis of Poetisches Freyden-Gedicht, a German oratorio presented by St. Agnes, further supports her political arguments (see pp. 141-150). This chapter is strongest when Page provides connections between the works performed and actual political events occurring in Europe at the time.

Other chapters focus much more on musical detail, revealing the levels of musical education nuns received as well as the styles most appreciated by their royal audiences. Page must be applauded for her depth of musical research and discovery. As she discusses in the introduction, her sources were often incomplete and fragmentary; many of the works analyzed in the book are also anonymous (p. 14). Regardless, Page provides us with a multitude of musical examples (more than thirty), either in manuscript facsimile or reset in modern type. All of the examples appear within the text, rather than in an appendix; while in many cases it is easy to read her analysis with the example on the same page, there are a few places where one must awkwardly flip back and forth in order to follow along (see, for example, pp. 103-110 or pp. 178-184). Page’s recovery of music for St. Jakob is one of the highlights of the book, as Maria Anna von Raschenau, a little known composer from the turn of the eighteenth century, often supplied music for its ceremonies. Von Raschenau was a jack-of-all-trades musician and composer, and had extraordinary training in singing, composing, and on instruments such as keyboards, violins, gambas, and the transverse flute (p. 53). Page’s analyses of her many works for St. Jakob show that von Raschenau cultivated flexibility in her style: her earlier works can be best characterized by older techniques such as homophonic choruses and chaconne basses, but her later works integrate recitative, aria, dance influences, and other Italianate features (pp. 70-72). The rich detail about Raschenau and other lesser-known composers throws into relief the comparatively small musical contributions that Joseph Haydn may have made to the convent of St. Nikolai. As Haydn’s first biographer, Georg August Griesinger, tells it, Haydn may have made romantic overtures to Theresia Keller, who later entered the convent of St. Nikolai; Haydn ended up marrying her younger sister, Maria Anna Aloysia. Page speculates that Haydn composed his Double Concerto in F, Hob. XVIII:6, along with an organ concerto, Hob. XVIII:1 and Salve Regina, Hob. XXIIIb:1, for his sister-in-law’s convent ceremony in the 1750s (pp. 34-40). While an intriguing tangent, the strengths of Page’s book lie not in her consideration of a familiar composer, but rather in her revelations about those who have not made the history books.

Some of Page’s examples also reveal an extraordinary amount of musical virtuosity present in these convents. Her discussion of Reutter’s Mater dolorum in Chapter 5, for example, illustrates just how rich and florid convent music could be (see pp. 175-191). The work is scored for a variety of obbligato instruments, including oboe, trombone/tenor oboe/viola, and trumpet, along with strings and an active continuo line. One of the most virtuosic arias included in the book is an excerpt from Carlo Agostino Badia’s Santa Theresa, an oratorio composed for St. Ursula in 1708. The florid runs of “Per strada fiorita” (p. 100) support Page’s most important musical argument for the book: that convent music was not limited to conservative antico styles, and that the modern, virtuosic style of the early eighteenth century was prized both by nun musicians as well as their imperial audience.

Perhaps one of the most interesting chapters of this book is the last, which considers the changing nature and use of music during the mid-eighteenth century. It was during this period that convent music became less politically important, as religion came to be seen as a tool to improve society, rather than as a means of reinforcing state propaganda (p. 222). Page explains the gradual dissolution of the convents in Vienna, first by examining Maria Theresia’s philosophical views on religion, and then considering the circumstances of dissolution under Joseph II in the 1780s. She argues that convents no longer represented the Habsburg worldview; in fact, convent life largely contradicted new imperial attitudes towards women, who were now expected to marry and have families rather than live a socially useless life locked away in solitude and pious contemplation (pp. 224-225). The dissolution and auctioning off of convent music and instruments provides Page with a sad, but illuminating ending—her narrative in this last chapter makes clear the reasons why Viennese convent music has been all but lost until this book’s publication.

Convent Music and Politics in Eighteenth-Century Vienna has few weaknesses. Page argues for the connections between court and convent skillfully, and the clarity of her prose makes the book an enjoyable read. In a few places, Page’s stylistic analyses border on the descriptive rather than the argumentative, largely when the libretto is more supportive of her argument than the stylistic elements of the music itself (for example, see pp. 57-65 or pp. 135-136); perhaps this is due to the novelty of the project and the necessity for exposition. The major strengths of the book reside in the numerous tables and charts that Page has carefully assembled. These clarify her ideas and give order to the various names, dates, convents, and orders that are scattered throughout the book. Appendix 1 is an exceptionally useful list of the musical events given at Viennese convents between 1660-1774, and such a resource shows just how much research and time went into Page’s project. Appendix 3, a family tree and dramatis personae of the Habsburg family during this period, also provides order to the chaos amongst the relationships within an extensive noble family.

Janet K. Page’s book offers an outstanding new study on an area of convent music previously untapped. Because of its interdisciplinary approach, Convent Music and Politics can be used for research and pedagogical purposes in a multitude of ways. On the one hand, Page’s study provides new perspectives on the links between the practice of Catholicism and the Habsburg court’s social and political priorities. On another, the book delves into the lives and experiences of religious women during periods of both stability and change. The music made in the convents unites these narratives cohesively and comprehensively. Convent Music and Politics succeeds in filling a scholarly void by arguing for the historical impact of religious women and the music they made in eighteenth-century Vienna.

Alison DeSimone (Assistant Professor of Musicology, University of Missouri-Kansas City) specializes in music of the late Baroque period, with a focus on early eighteenth-century opera. She cultivates particular interest in the history of opera singers and singing practices of the early modern era, as well as the music of George Frideric Handel. She is currently working on two book projects: the first, a co-edited essay collection on Music, Theatre, and the Benefit Concert in Britain, 1660-1800; and the second, a monograph on musico-theatrical miscellany and its effects on the creation of celebrity and cultural taste in early eighteenth-century London.